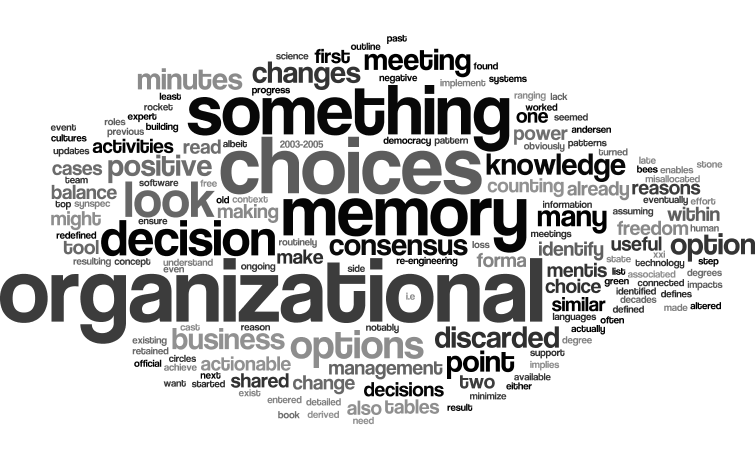 I shared a more detailed background, ranging from bees democracy, human decision making "in circles", DSS, etc (including how I connected those ideas).

First in political activities, then in the Army, and eventually (for few decades) in business, I routinely saw how only the "positive" side of organizational choices entered the (official) organizational memory.

I am assuming that each meeting produces minutes and is a progress from a previous meeting: otherwise, it is either a social event or part of an ongoing negotiation or argument, not a meeting.

When making choices, since I worked on Decision Support Systems in the late 1980s, I found useful (at least as a "forma mentis") an old tool that I derived from "Andersen Green Booklets" and a 1978 book on "Decision Tables".

An outline is available on Wikipedia, but the concept is quite simple.

In my use of decision tables, also when knowledge wasn't perfect (i.e. something similar to "one, two, many" as a counting pattern in some languages from cultures that did not need counting), the point was always to:
1. identify degrees of freedom
2. on each degree of freedom, look at the option (also "one, two, many" is often enough)
3. look at all the resulting "actionable options"
4. on each actionable option, look at weaknesses.

Then, make choices on the "patterns" accepted, those discarded, and the associated reasons.

Again: it is a conceptual ("forma mentis") tool, not necessarily a technique or technology (albeit software implementation do exist, and I too, for Business Process Re-engineering and Organizational Change activities, defined something similar).

The next step is what you do with the result of your effort.

In most cases, only the "positive choice" is retained, with limited information about options that were discarded.

Within this context, organizational memory is obviously to collect all the choices, positive and negative, options identified, and reason of the choices.

If you really want to implement change (something I started then doing officially from 1990) and ensure its long-term sustainability, you have to keep track of:
1. choices you made
2. choices you turned down
3. reasons of both.

No rocket science, but look in your own business: how many meetings minutes list all the options and, for each option, state point 3. above (in most cases, even point 2. is by consensus removed from the minutes)?

Having "organizational memory" of those choices enables, when something affecting what was implemented changes, to faster understand impacts, minimize them, and identify if something that was discarded in the past might actually be useful.

Alternative? Notably in organizations where changes to something already existing is approached first "from the top", a lack of organizational memory implies that scarce (and expensive) resources are misallocated.

I shared already in 2003-2005 (reprinted with updates in 2013) my position on knowledge management and (loss of) organizational memory, but a quick introduction can be read on Wikipedia

For more on differentiation of roles within the "structuring" of knowledge, have a look at #Synspec, on "XXI Century Expert Team Building and Management", that I published in 2014 (can be read online for free).