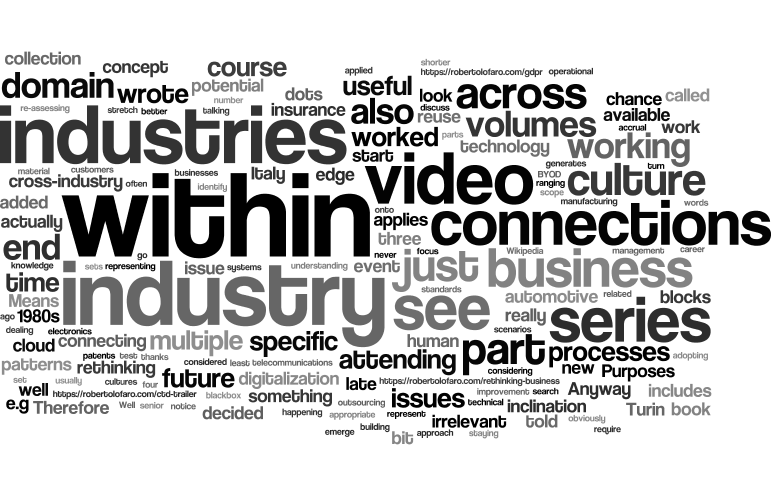 Whenever you share a video, you are actually sharing what converges into that video.

And this is even more appropriate when the video is about a book series called "connecting the dots".

Now, what is the "connecting the dots" series represented within the video presentation available at https://robertolofaro.com/ctd-trailer ?

If you look at the video, you will see that there are three basic "building blocks", representing "Purposes", "Actors", "Means", and "Methods".

Actually, "Purposes" and "Means" represent the application of the background given by those three blocks to a specific culture, domain, issue.

So far, five volumes have been published, while the same framework has been applied to a book preceeding the series (it was a "market test"), and few other "sidelines".

Sidelines? Application of the same approach, but to other issues.

Specifically, before I decided to formally launch the "ConnectingTheDots" series, I decided to start to a cross-industry issues that blends technology, compliance, and human resources plus corporate culture.
<br/The target: it was 2014, so it was the "Bring Your Own Device(s)" (BYOD) concept- and its impacts from a business perspective (see https://robertolofaro.com/byod).

Another, after publishing four of the volumes: it was 2018, so, sticking to privacy, obviously... focused on GDPR (see https://robertolofaro.com/gdpr).

This week I am attending an event in Turin, Italy, called A&T- on manufacturing 4.0, digitalization, and associated issues.

Issues ranging from quality and measuring (the original "scope" of the event), to digitalization, patents, human capital, and anything related to introducing 4.0 concepts within businesses.

As I wrote more than once, including in books, by chance and inclination since the late 1980s ended up working across multiple business domains and industries.

Started in Italy, then added few countries- usually on demand by contacts and colleagues.

Therefore, found myself working in a wide range of assignment, technical and non-technical, more often than not working with senior management.

At the same time, worked and lived across multiple cultures.

You end up developing your own "knowledge accrual method", so that you can get quick onboarding onto any new domain, industry, or culture.

Decades ago I was told that a university professor in Turin told to students attending his course on operational research something really simple.

Or: that, by attending his course, they were set on course to never see the world as they saw it before.

The same applies when, by business and inclination, you end up collecting elements in domain A worth reusing in domain B, or identify patterns in culture A that could be useful to solve a specific issue that you incurred in while dealing with culture B.

In the end, if you, as I did in the late 1980s, were to be tasked on a daily basis to work on short notice on something cross-domain and cross-culture, you would end up constantly re-assessing and re-framing, and expanding your "collection of reusable patterns".

A caveat: just considering business or technology, I worked across many technologies, and on some processes (e.g. controlling) across multiple industries.

Therefore, each further element added to the "collection" generates a significant growth in the number of connections.

If you want to follow the brain paradigm, a project is a new cluster of neurons, with "connections" to other clusters- it is the "reuse" part.

And it works back-and-forth.

Welcome to the XXI century: in my case, it happened by chance, but when each business will have data and processes and systems within the cloud (or the edge- search both on Wikipedia), you will be able not just to decide to create connections, but see connections emerge.

Why? Because "staying" on the cloud or on the edge will eventually require adopting some cross-industry and cross-purpose standards.

And when connections will see industry-specific as almost irrelevant, maybe some exchanges initially planned within industry 1 could actually, just by being available, enable further connections.

Well, a video is also a bit of marketing- hence, there I wrote that industry is irrelevant- which is a bit of a stretch, at least for now.

Beside this video, there will be more to support and summarize or expand on other volumes of the series.

As for the future volumes of the series, shorter and preparation material will appear as part of my "rethinking business" blog series (https://robertolofaro.com/rethinking-business).

Anyway, overall the concept will be to discuss specific potential development scenarios for the industries that I worked on across my career, as well as their current, future, or foreseeable developments (just have a look at https://robertolofaro.com/cv).

My main industries were automotive, banking, various parts of logistics, with more than one side of retail and (Italian) Government, as well as outsourcing and startups.

The interesting part is that, in the future, as I wrote repeatedly, all those industries (and some more) will not be just "industries" to be considered as "vertical sets of processes".

But, as I hinted in the video (or you can read e.g. within https://robertolofaro.com/consentdata), you should really focus on connections, not industries.

Anyway, it is already happening: if you have a blackbox installed within your car upon suggestion of you insurance, are you talking about electronics, telecommunications, or the traditional automotive and insurance?

The same applies to industries, but while thanks to Internet this includes also consumers and customers, it also includes rethinking industries.

And, in part, it has been so for a long time.